Issue and circulation of Ekhi, a useful tool for the real economy and the community.

What is it a local currency? Local currency is mainly a tool, an economic tool to facilitate exchanges and to set up networks in a community. ”Ekhi” means sun in ancient basque language, and it is a symbol that is linked to the “Ekhilore”. Ekhilore are pricky plants with the shape of the sun, and they were hung, and still happens, on the doors of the countryside houses to keep them away from the bad spirits. In this way, this meaning is really appropriate, because the aim of Ekhi is just to promote what is local, what is ours and what is sustainable versus this crisis that is not only economical but also ecological and a crisis of values and that is getting stronger and stronger.
After working for two years, the sun is about to come out. Will you help us to launch it? 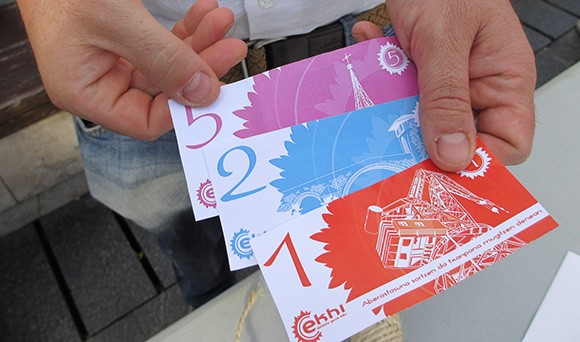 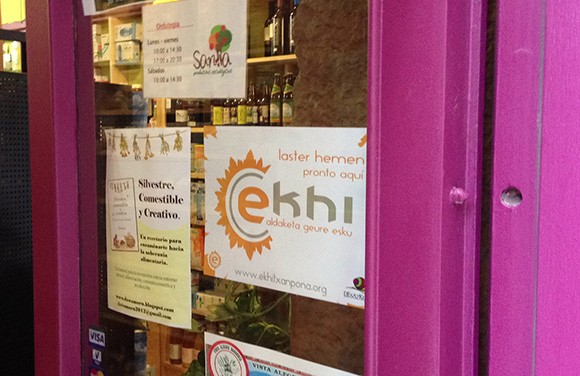 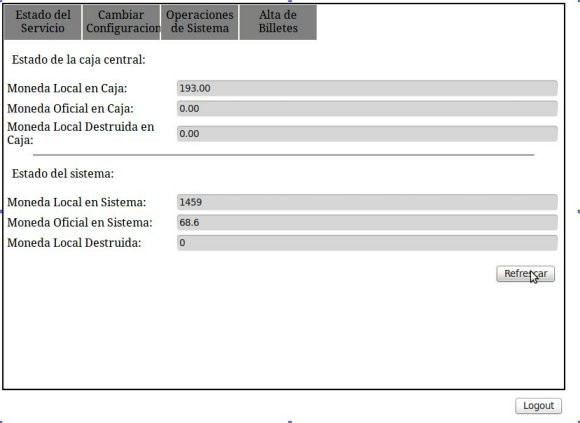 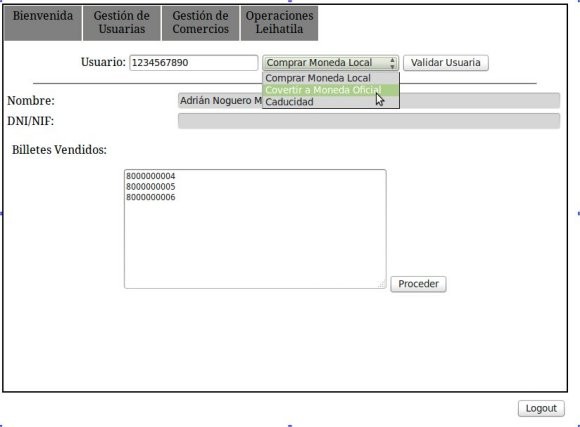 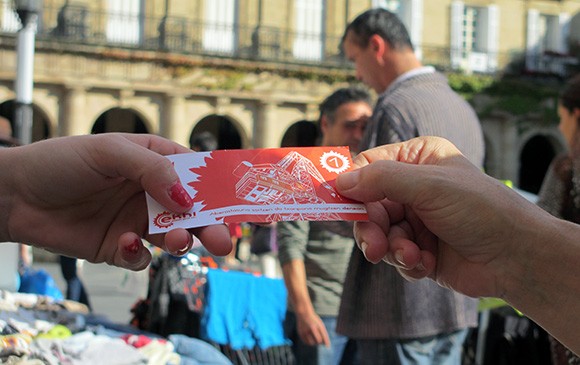 Ekhi will be launched in the old part of Bilbao in January 2014. Nevertheless, it is our goal to create local teams to spread the currency in Bizkaia. Besides, Ekhi is based on four values: equity, sustainability, gender equality and our culture and language promotion. On this way, companies that take part in the project should share these values and we will promote that these companies will get some commitments, such as the use of fair bank services or renewable energies through energy cooperatives.
The regular working of Ekhi is sumarized in the next steps: 1.-The Association for the promotion of local economy Ekhi, will be in charge of running the local currency. It sells 1, 2, 5,10 and 20 euros bills to the consumers. Bills will be sold in the premises of some local associations joined to the project at the prize of 1Ekhi=1 Euro. 2.- Consumers will use the bills in local companies that accept Ekhi as currency. The currency flow is promoted thanks to the expiry date. 3.- Local stores can use the local bills to pay their expenses but they can also get euros from them. This way they will get 0.95 euros from every Ekhi, so as to prevent the conversion to euros and keep the money in the local economy. 4.-Finally, those 5 cents are split: two cents will be used to pay the expenses of the currency and the other 3 cents will be invested in Ekhifunding.

What is it the Ekhifunding? Anytime we get one Ekhi , 3 cents are put aside for the social funds of the currency that is called Ekhifunding. The objective of this fund is to sponsor the projects of local associations and social movements that are related to any of these fields: social justice, ecology, gender equality or language and culture. The whole fund will be shared out at the end of the year in this proportion: 1.- At least 50% will be used for sponsoring projects of local movements and associations. Every year we will organize a tendering process and the users of Ekhi will decide which project to fund, and, therefore the funding.2.-At least 30% of the Ekhifunding will be distributed to the associations and social movements that collaborate with the project by selling Ekhis. 3.- Remaining 20% will be dedicated to one of the above mentioned purposes, depending on the situation and after the decision by the assembly of users and companies. This way, the more Ekhis you are taking the more money will be distributed to your association or local movement.
What is the expiry date? As we have already mentioned above, Ekhi, as vegetables do, waste value over time. The goal of expiry date is to prevent from accumulation of money and promote its circulation, in order to create as much wealth as possible in the local area. We can see this effect through the example of Chiemgauer region in Germany: since their currency expires in three months, it circulates three times faster than euro. This means that three euros will be necessary to create the same wealth as one simple Chiemgauer does, because…..Weath is created when the currency flows!
In our daily life expiration works as follows: 1.- We set 4 fixed expiration dates: January 1st, April 1st, August 1st and October 1st. Bill will expire in the soonest expiry date next to its issue. As an example: Ekhi sold on February 22nd will expire on April 1st.2.- If we are two weeks before the expiry date, it will expire on the next period of time. For example, Ekhi is sold on March 22nd, it will not expire on April 1st but on August 1st. 3.-Consumers that have got expired bills will have to pay 2% of the cost of the bill to renew this bill. This amount will be paid in the exchange office, where the expiry date will be renewed. 4.- If companies have got expired bills, they will be able to renew it free of any cost in the next two weeks after expiry date.5.- After this period, companies will have to pay 2% of the cost of the bill, as consumers do. 6.- This money will be used in Ekhifunding. 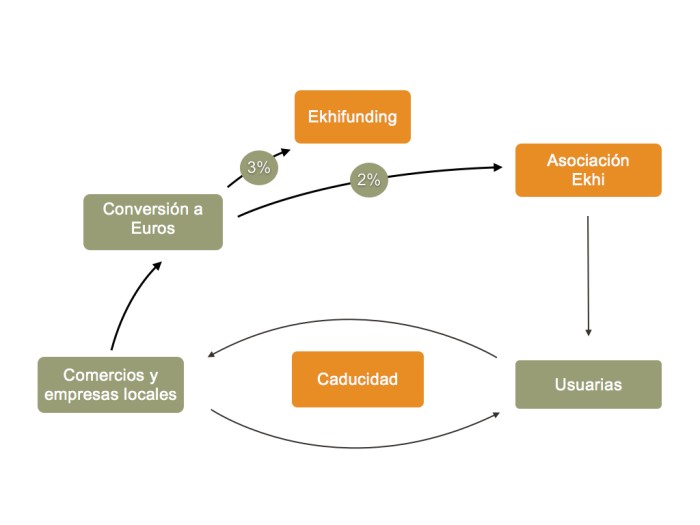 Local currency Ekhi tries to be a local experience that allows us to reconsider current monetary system. Nowadays nine out of ten Euros are hold in financial markets, as well as real economy suffers long term lack of money. Most of the money is created from nothing, by private banks, and instead of being a tool, it has become a goal in itself. The aim is to accumulate money so as to demand higher interests, in this way they will keep creating money from money, which leads the economy to increase far away from our planet limits.
Our goal is to turn around this situation, from a bottom-up approach, recovering the original meaning of money: to be a useful exchange tool for real economy and community. Consequently, we expect to put on the same level as other physical products, that is to say ,that money expire on the hands of those who keep it too long. In this way we achieve both goals, to avoid money accumulation in the hands of a few and to increase of the circulation of money in local area.
Moreover, Ekhi will not be used beyond Bizkaia region. This means that its wealth will remain in the network of the businesses that take part in the local currency project. Until now money was blocked in financial markets and it did not reach real economy, but through this approach wealth is blocked in local area, moving from one business to another without going out to financial markets.

Ekhi is addressed to those individuals who are motivated enough to undertake new real experiences of change, who believe in a new model of economy that is not rotten by speculators, people who think of common wealth, who try actively for transformation in this crisis. In summary, it is addressed to those who want to take part in the creation of an illuminating project.

If your economical situation, job situation is not to good to help us, you just don´t have time or you just do not want to collaborate by giving some money, take a look at the colaborators site or write us with your suggestions.

We want Ekhi to be money for the people, therefore, any better way to launch it than co-funding among all of us?
We do not receive any public or private subsidy and we would like the project to be financially self sufficient. In this way, we hope the currency will be self-supported through the initial contribution of users (single entry fee of 5 euro ), annual fee for the business (20 euros) and the money got from the association any time Ekhi is sold (2%). Consequently, we can cover the printing and maintenance expenses, because project will be mainly hold thanks to the volunteering work of members of the association.
Although it might look paradoxical we need euros to start up this Project, a minimum initial amount of money to print the bills in advance, to pay initial expenses (barcode readers, some printing Works…) and to give some money back.
In order to manage the currency we are creating “Lehiatila”, an open software available to any other community that wants to start up any other local currency.
On the other hand, this campaign is essential to enlarge Ekhi area and involve more people in the project. Are you coming? http://www.ekhitxanpona.org/participa.html 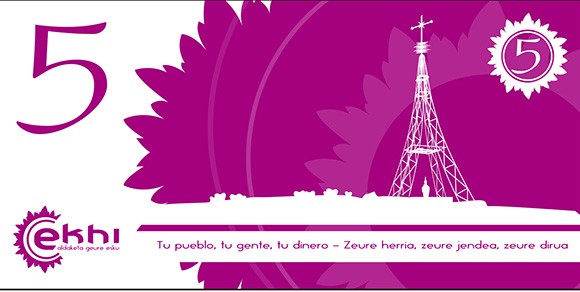 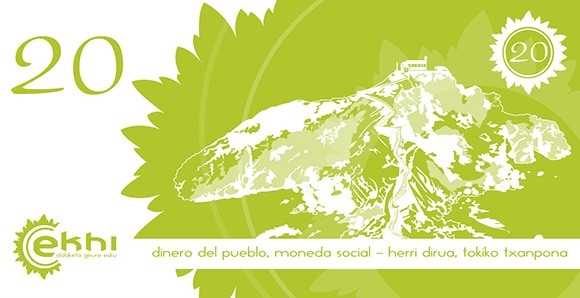 Ekhi local currency started in September 2011 in Desazkundea collective http://www.desazkundea.org (Basque Network for Degrowth). At the beginning no more that 5 people were involved in the project.

During 2011-2012, we mainly focused on studying different models of alternative currencies world-wide: Time- banking, LETS, bonus,…In adittion, we went to Toulouse to know their experience with local currency “Sol violette” (http://www.sol-violette.fr/) , we took part in the First National Encounter of Local Currency in Vilanova y la Gertrú (http://encuentromonedasvng2012.blogspot.com.es/) where we got contact with many people all over the country to learn about the projects they were running. We investigated and discussed to define a sustainable model for local area.

The second year was more intense: the team grew up to ten members, and having in mind the goals we wanted to achieve, we started this journey: we organized meeting with local traders, we presented the project for the first time, we started to appear in the media and we organized elections to choose the definitive name of the currency: Ekhi.
Today, more than two years have already passed since local currency in Bizkaia was born. The leading team of Ekhi is working intensely for the currency to be active from January 2014 and so far, more than 15 local businesses have already decided to accept the currency. 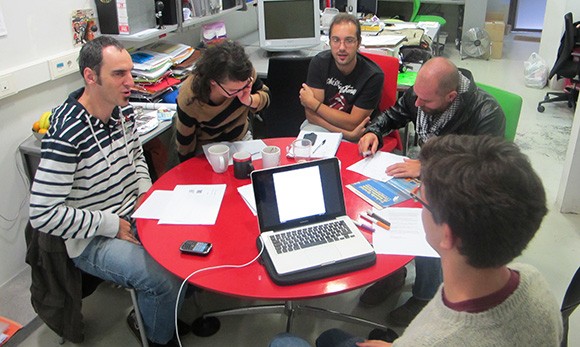